Pour Another Round: Come Drink with Me (1966) Review Update 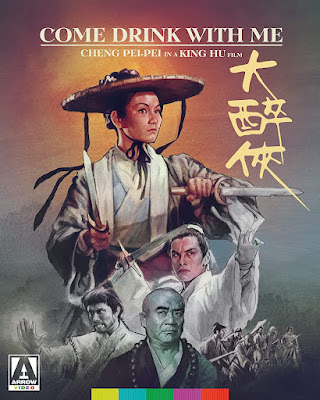 Similar to my updated review for King Boxer, I have spent a considerable amount of time in my career singing the praises of Come Drink with Me as a cornerstone to martial arts cinema - and in my opinion, all of action cinema. Enough so, that I assume I sound like Drunk Cat, the mysterious vagabond in the film, when he sings for the bar in an attempt collect some tips. I'm just singing the praises of martial arts cinema classics.

There is already a full review for the film here on the website that you can read at the following LINK which I wrote some seven years ago. more recently I included the film in an article about King Hu’s Inn Trilogy - a piece that can be found HERE. So, yes, I have been spending some time already writing about this film. Yet, with the latest Arrow Video Blu Ray due to hit shelves this month, I felt inclined to pipe up once again with my warblin' singing voice.

More so than anything, this update is just to remind everyone that Come Drink with Me remains one of the quintessential slices of cinema in all regards. The ripples of its choices as a film continue to be felt today and any self-respecting fan of world cinema will have to have seen this film. It’s dynamic and progressive for its time, sporting a slew of iconic performances from an all-star cast, and solidifies the wuxia formula for the rest of time.

Not to mention, there is Cheng Pei Pei as Golden Swallow, perhaps one of the most impressive heroines to ever grace the screen. Her stand-off in the inn of the first act is one of my personal favorite flexes by a protagonist in a film ever.


The film has seen a relative re-emergence thanks to a couple of new Blu Ray releases - the first was from 88 Films in the UK and, more relevant for most of our readers, a stunning new release from our friends at Arrow Video. The restoration on the film is fantastic, the same one as the 88 Films disc provided by the Shaw Brothers catalog owners Celestial Pictures, and it contains some impressive special features. A handful of new interviews with key actors conducted by Frédéric Ambroisine, the second part of a Shaw Brothers documentary that focuses on the swordplay film that features every famous martial artist from cinema under the sun, and a brand-new commentary from film historian Tony Rayns. Needless to say, with its features and new fantastic packaging, it’s hard to deny this latest release.

If you enjoy film history, love the spiritual underpinnings of iconic director King Hu, or just love classic action cinema, then pick up Come Drink with Me. It’s so iconic, you’d be silly not to love it.