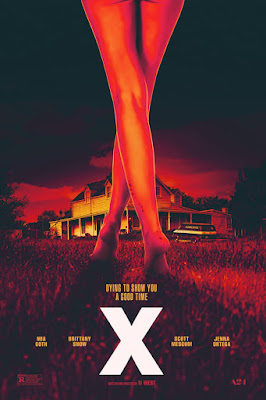 Over the last few years, the slasher has started to make another comeback. I’ve mentioned it a few times in recent reviews, including our coverage of Scream (2022) just a couple of months ago, but it’s a fascinating time for the slasher to be rearing its gory and gimmicky head. Perhaps it’s the reactive way that things swing after a handful of years of slow burn, artsy horror that has dominated the landscape, but nonetheless, here we are once again as slashers regain momentum.

Of that reactionary stance, perhaps it makes sense that A24 would leap in on it as they continue to be one of the big studios leading the horror charge in theaters, but a slasher seems like it could be outside of their overall style as a studio. Compound that by having writer and director Ti West helm the film X for the studio and it seems like it could be a massive misfire in concept out of the gate.

Yet, X, the film that brings Ti West and A24 together for the first time, is a wild and offbeat success. It rocks a see-saw teetering balance between the director’s notable slow-burn style and the more entertaining titillations of the genre. It also adds in just enough of that artistic flavor of the studio to snatch the horror fans with an “elevated” taste. It’s strangely effective at what it does and it makes X one of the more effective throwback horror flicks in recent memory.

Granted, riding that line between a more artistic experience and the exploitative elements of a 1970s/early 1980s slasher comes with its challenges. X takes quite some time to get into the nitty gritty of its horror elements, taking a solid amount of time to set up its characters and setting. If anything, the pacing of the film is perhaps the biggest deterrent for the film. X gears up slowly and hits full sprint in the final act, but it’s lacking body count in the first two thirds can steer slasher fans away from what the rest has to offer.

The characterizations are strong though and the performances are outstanding across the board, even if all the protagonists, in true slasher fashion, are essentially caricatures. If anything, West and the actors craft roles that fit into the caricatures but work to realistically ground them and it’s an impressive navigation that emblazons the entire concept of the film. This is why Bobby Lynn (Snow) and Jackson (Kid Cudi) could have been closer to satire than anything, but they aren’t.


However, that’s most of the first two-thirds of what X delivers. When it comes to the down and dirty slasher third act, West showcases his love of the genre. Although the killer of the film may not seem threatening on the surface, that’s where X can conjure up some solid tension. There are moments of horror in the third act that are classic slasher moments (searching the barn will always yield bloody results) and other ones that push further into surprising territory. There’s nothing like an unnerving dance to a classic 70s rock song that ought to jack up the creep factor of a film. The gore runs rampant, the pacing pops, and the classic slasher elements start to sparkle with the visual moments undercut with the previous mounted tension.

Granted, while comparisons to The Texas Chain Saw Massacre (and its various knock offs) abound throughout the film, West embeds the film with enough psycho-sexual tension that feels a bit more modern in its exploitation elements. The manner that X uses Mia Goth, who once again proves her acting strength in multiple ways throughout the film, as a mirror to the film’s villains is smartly crafted. Not to mention how the sexual themes bind the antagonists and the protagonists together in a disgustingly disjointed way. It’s layered in a way that uses the exploitation of a slasher to say something - even if most viewers can’t seem to agree on what the something is.

Although my expectations were metered at best, X was a shockingly effective modern slasher. The discourse on the film is already divisive and the film’s gap between critic love and general audience apathy is certain to spark some strong debates in analysis. Still, with how X plays out in its visuals and writing, that doesn’t seem far from what Ti West or A24 were aiming for with it. X is unflappable in its love for the genre’s decade’s old styling but does it in a way that adds just enough life to spice things up for a formula.