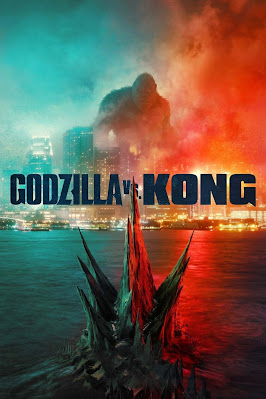 Well, it’s here. Finally. After three previous films, each one receiving rather mixed reviews and a continually declining box office, the Legendary and Warner Bros. ‘Monsterverse’ culminates in Godzilla Vs. Kong. Yes, that’s correct, the titanic duo come together once again in the monster showdown that was well on its way into production when Godzilla: King of the Monsters struggled at the box office. To its benefit, the long delays to release postponed originally to “allegedly” distance itself from the relative disappointment of the previous film and then a few more times due to the pandemic, have allowed the film to breathe a bit and find its footing. Its surprise success at the theaters, despite premiering day and date on HBOMax, is an indicator of two things: a) that audiences were ready to see a film truly made for the theatrical experience and b) enjoy a film more fine-tuned to deliver on its promises.

It helps that, in conjunction with both of those points, that Godzilla Vs. Kong is truly the spectacle-driven film that audiences craved. Yes, it suffers from many of the same issues that fans and critics pointed at in the last film, but it’s also one that punches up the entertainment in a heartfelt and colorful manner. Godzilla Vs. Kong is primed to continue to appease fans of the two gigantic monsters but manages to trim the fat to the point that even more casual fans can enjoy it - even if it occasionally leaves some ideas and characters on the cutting room floor.

Many of the ideas and characters that end up trimmed as fat from the film belong to the ‘human’ portion of the plotting and narrative. Godzilla Vs. Kong follows two groups of people, one lead by Millie Bobby Brown, returning to her role from King of the Monsters, and the other lead by newcomers Alexander Skarsgard and Rebecca Hall as they attempt to find a new home for Kong in the center of the Hollow Earth. Neither human story is all that impressive, focusing more on getting the audience from point A to point B for the two titular titans to collide and there is a whole lot of G Science (a term we use here to describe scientific mumbo jumbo used to give meaning to massive leaps of logic) that is meant to elevate thrills more than make sense. Not to mention, the film easily manifests plenty of shortcuts in the plot to get the audience where they need to be in a timely manner. Why would the Apex corporation leave an elevator so blatantly unguarded if it leads to a super-secret lab with super-secret super tunnels across the globe? Don’t ask questions. Monke bout to punch Lizard.

The human element is simply the means to the end for the film. The strength of Godzilla Vs. Kong is that it uses Kong as the heart, particularly his connection with a young girl. While Godzilla tends to drive the action, thanks to the “Godzilla is hunting something and we don’t know why he is doing it!” plot line, Kong is the only character that really has a full character arc. This parallels the original King Kong Vs. Godzilla film in a manner, where Kong is used to achieve some human goals initially but ends up being the key to “stopping” Godzilla. Naturally, the film has other plans under its sleeve with the two titans, but to spoil that third act and some of its fun is to spoil the experience.


It’s notable that, despite how often films with a ‘versus’ in the title are often lacking in actual battles, that Godzilla Vs. Kong is ripe with them. The film’s structure and entertainment factor are inherently linked to fulfilling the promise of its title. This approach allows the film to work. Kong and Godzilla clash three times in the film and each one is a new and very exciting sequence to watch. From the well-marketed battle on top of an aircraft carrier to the climactic and neon-soaked Hong Kong showdown, all of these action set pieces deliver the fur v scales kaiju glory one asks for. Each one is shot and developed like a WWE match, complete with outlandish theatrics. You’ve at least seen the shot of Kong leaping from the ship to avoid a nuclear blast or Kong wielding a giant-ass axe that absorbs Godzilla’s power. This is the norm for this film and the final battle will leave fans cheering in the sheer scope of the throwdown.

Last but not least, it should be mentioned for our readers that Godzilla Vs. Kong is brimming with Easter Eggs - for both the titan franchises and other notable moments. Yes, we have discussions of genetic memory ripped from previous Godzilla films. Kong develops a relationship with a young woman (this time in a fatherly and protective figure role - a much-needed revamp of the classic King Kong lore). Godzilla Vs. Kong also loves to add a few other things. References to Back to the Future or Lethal Weapon – where Kong has to put his shoulder back into place by slamming it on a building, are just the tip of the iceberg. Cinema fans will have to dig to catch them all.

Godzilla Vs. Kong is a flawed film. As is the nature of the beast, looking back at 60 plus years of franchises that are both seriously flawed. Yet, in its flaws, the film finds its heart. This is not a film where logic is meant to be forced on the human interactions or the physics of the real world on monsters. This is a film where everything is made to deliver entertainment, from its colorful spectacle in visuals to the reveals as to why the two kaiju are destined to lock fang and claw. It succeeds in spades on that ground.