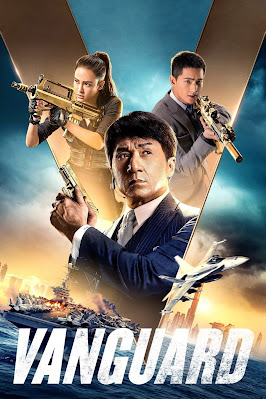 When Kung Fu Yoga came out in 2017, it quickly dispelled the notion that perhaps, just perhaps, the combination of director Stanley Tong and star Jackie Chan could recapture the lunacy of Supercop and First Strike. It was a mess of a film, but it made some impressive box office dollars, so why not have them team up again for another massive international action-adventure flick? This is why we have Vanguard, the latest hollow attempt at mass appeal riding on the coattails of past success. With over 10 minutes of credits at the end, the film is 90 more minutes of sheer outlandish action, punctuated by bright colors and patchy CGI, that aims to move so quickly from set piece to set piece that its audience might forget that there should be a movie underneath all of the glitz and glam. What’s left is a film that is about as effective as a long commercial in terms of storytelling quality. That presents a problem if its viewer wants more than just misguided style.

Jackie Chan, playing Jackie Chan...err...Tang Huanting, leads a private military force called Vanguard and when a high-profile businessman finds himself the target of a terrorist group and mercenaries named Arctic Wolves, they will have to come to the rescue to save him, his daughter, and uncover a larger conspiracy at the heart of the terrorist plot.

If one were to distill the basic concept of an international action film, one might easily come up with the synopsis above and, let’s be honest here, the outline that represents the script to Vanguard is hardly impressive. The team representing the titular company of high-tech gadget wielding “good” mercenaries is meant to be an ensemble, with Chan as the leader who still gets in a few solid action set pieces, but in doing so the film rarely gets past broad stroke and bland caricatures. One character gets a generic dad subplot and the other gets the flimsiest romantic subplot possible, but the rest - including Jackie - are stock shadows of plot points. And what little is there for characters is so uninspired that their success or failure in the conspiracy plot is made completely irrelevant. Even if they weren't superhuman fighters with gadgets out the ass that couldn’t lose if they tried, I couldn’t care less if they did. The charm of the cast is lost in the void of gloss and hyper-reality of the style and “storytelling” presented. That says nothing about the villains, a series of appallingly generic stereotypes that even the Hollywood system might be concerned with these days.

Of course, the script and characters are just a means to an end to get to the action of the film. Now, for those action junkies who just need a hit of the biggest and most outlandishly silly action sequences this side of Paul WS Anderson, Vanguard will suffice. In a meager defense of the film, it delivers A LOT of action. Quality is not of concern though when the quantity is this high. The film only uses its dialogue, characters, and plot to move from one set piece to the next. The hand-to-hand combat is decent enough, perhaps too flourished with editing to have any real impact, but there is some fun choreography and stunt work to appease the HK fan in me. The rest is spectacle for the sake of spectacle. Remember those terrible-looking CGI animals in Kung Fu Yoga? They’re back and as perplexing as ever with lions, sharks, hyenas, and birds. How many vehicles do we need to use? Motorcycles, jet skis, boats, cars, car boats, gold cars, and they even manage to get a jetpack in there for a character named Condor. It’s just a shame that Stanley Tong and company seem more impressed with trying to fake out the audience with CGI than actually delivering thrills in the action. Otherwise, this might have been far more fun.

Yet, in one of the most eye-rolling ways possible, Vanguard provides just enough entertainment to vaguely disguise itself as a soft propaganda machine. Do we get to talk about how Captain China is better than Captain America? How about how the head of the Dubai police is married to a Chinese woman because they are the most beautiful? Not to mention, the film starts and ends with the worldwide celebration of Chinese New Year in one of the most obvious attempts at playing to the CNY crowd in theaters (had it arrived when it was supposed to prior to COVID.) Although most of it is played for fun, it is notable just how obvious this approach is in the script and performances during the film. No real judgment, I grew up on some of the most jingoistic material from the Hollywood system in the 80s, it just struck me as humorous.

Vanguard is silly, action-packed, and loaded to the gills in sheer, shiny spectacle. If that’s what you want from your films, then by all means please consume with vigor. However, the hollow characters and lacking attempts at providing anything but style makes for a sugary, but an unfulfilling cinematic meal. There is so little heart and weight to anything in the film that even the thrills of its ludicrous action set pieces fail to inspire much excitement.

Hopefully, Stanley Tong and Jackie Chan aim for more quality on their next projects.

Written By Matt Reifschneider
Posted by DarkReif at 12:57 PM