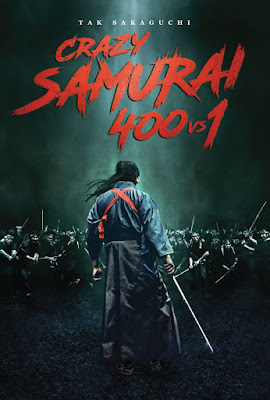 When Crazy Samurai 400 Vs 1 was originally announced, under the simplified title of Crazy Samurai Musashi, it was hard not to be excited. Mainly because cult favorite action icon, Tak, would be stepping into the shoes of the titular folk hero, Musashi, for the film. Of course, it would only get more exciting from there as the film was touting that it would feature a 77-minute, one-take action sequence that would have our badass ‘hero’ fending off 400 foes.

Granted, once a person starts thinking of the logistics of such a feat, the excitement lends itself to wariness at the audacity of any film to attempt it. Could any film truly pull off this kind of incredulous notion? Could they defy the odds and make it work?

Thanks to our friends at Well Go USA, Crazy Samurai 400 Vs 1 is now available on both their streaming platform Hi-Yah! and via physical media. The results, while ultimately mixed, are worthy of a viewing just for the curious. At a strangely brisk 92 minutes in total, the 77-minute action set-piece constitutes over 83% of the film’s entire run time and the insanity of that statistic is felt on screen.

Before jumping into that action set-piece though, let’s look at the rest of the film. That’s because despite a rather high-profile film festival run, wide international release, and featuring a star like Tak, Crazy Samurai 400 Vs 1 is a film that feels like a test run for something bigger. The film has no plot to speak of and no real character or larger narrative to follow. The opening sequence gives its audience the setup, where Musashi aims to assassinate the young heir to a clan, and then it just jumps right into the action. The main character is not even introduced until the action starts when he starts to take on the 100 samurai and 300 mercenaries that are poised, armed, and ready to die to save the clan. The opening sequence and finale are both traditionally shot cinematically and impressively so, might I add, but the time spent with both is obviously meant to juxtapose the real reason that anyone is watching this film.


Although I had made the assumption that the one-take action set-piece would be a highly choreographed and intricate affair, the reality is that it feels more akin to a live improvised theater performance than anything else. Tak is always a screen presence, thankfully since he is given absolutely no character development as the lead and relies solely on it, and the action is thrown strictly on his shoulders. There is very little in the way of diversity in the set-piece, only occasionally stepping aside for a minute or two to introduce a slight change of scenery, a small shift, or mid-tier 'boss battle’ against a slightly different foe. The rest of the fight feels like an improvised sketch where Tak and the various stuntmen are asked to loosely get to certain spots on the set within the forest or abandoned village for key camera moves or the arrival of specific characters. Hell, the film even builds into its structure moments for Tak to get a drink or eat a bit of food, slyly written in as if the character Musashi has prepared for a larger fight and set aside these items and fresh swords for him to utilize in the rampage. In a way, this is an intriguing way to build the fight sequence, but it’s also one that almost immediately becomes repetitive in its naturalistic manner to approaching the action.

Ultimately, Crazy Samurai 400 Vs 1 is a film that is solely carried by the gimmick. The idea is fun and for those curious, it is worth seeing just for the sheer balls of the filmmakers in trying to pull off the entire escapade. It’s not nearly as dynamic as one would hope, particularly when one gets to see the fun action set piece of the finale done in a more traditional cinematic manner, but it is a film worth viewing for its angle alone.