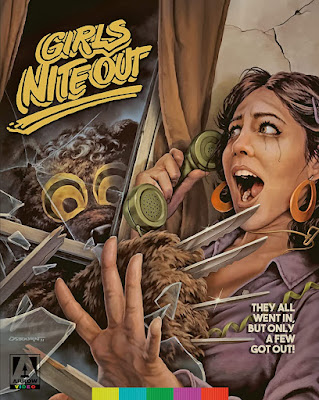 There’s a moment in Girls Nite Out where the film bounces between a radio DJ giving out clues for the campus scavenger hunt, a sorority girl putting on lipstick, and the mysterious killer taping together steak knives and putting them through the mitt of the bear mascot for the school basketball team. Welcome to 1982 and the slasher boom is already in full swing and if those three things mentioned being done in sync doesn’t give you everything you need to know about this forgotten slasher, Girls Nite Out, then it’s time to go back to Slasher Basics 101.

For their latest unearthed slasher, Arrow Video has dropped another collector’s item for slash-fans and overall horror nerds to add to their collection. Girls Nite Out, in true 1982 fashion, runs through the tropes with relative ease and most slasher fans will find aspects to love about it. However, it’s rather slow pacing on the front end and run-of-the-mill kills (run-of-the-kill?) make it far more generic than it could have been with its clever set up and angle on the killer.

In the opening, it’s a relative shock to see that most of the main characters of the film, particularly one called Girls Nite Out about a sorority scavenger hunt being stalked by a slasher killer in a bear costume, are mostly the boys basketball team. Although, as the film progresses it does add in a slew of other characters tied into the school to set up its fodder for the slaughter. Too often it’s a lot of very similar characters without enough distinguishing factors to make any of them truly stick out.

The obviously too-old-for-the-roles cast are decent enough at invoking just enough humanity, but the film takes a very long time in setting up the ensemble cast, the relationships, and various small-town plots for what constitutes a handful of thinly veiled college sex jokes and other caricatures used in slashers of the period. There’s some respect to be had that Girls Nite Out is taking its time to establish characters and the world of this school and small town, but it ultimately kills the pacing and the number of characters spreads the depth thin.


And yet, despite those foundational issues in getting the humanity and momentum of this film going, Girls Nite Out has just enough fun ideas up its sleeve to be decently entertaining. The idea of a scavenger hunt at night across the campus is great in getting characters to split up for the killer to take them out, it puts random characters into random places for potential slayings, and it’s all stitched together by a silly radio DJ who gives the clues to the next object while he plays a handful of classic oldies on the radio. Just that idea, in general, gives the film a ton of potential.

Layer that on top of an urban legend killer from the town’s history (trite, sure, but effective) and a killer in the school mascot outfit with a bear paw filled with steak knives and there’s a recipe for a massively fun film on hand. The kills themselves tend to be relatively by the numbers as the killer hisses some anti-women rhetoric and grabs them by the throat to bloodletting results. The kills may not be as effective as one would hope, but the reveal in the final moments is worthy of the time spent. 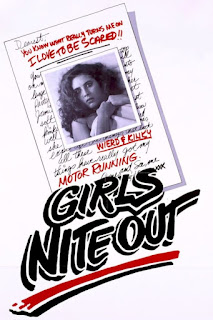 If anything, instead of remaking so many of these other slashers, Girls Nite Out is one of those prime properties aching for a new and stylish take on its premise. There are a lot of intriguing moments in the film, subtext in scenes in how college relationships complicate matters, and the structure bodes the intention of making the film more than just another slasher including a third act that goes into police procedural with Hal Holbrook looking stern at a desk. Yet, the whole is not greater than its parts as it never finds a way to congeal the pieces together in a way that’s as provocative or effective as it might look on paper.

For the slasher fans, Girls Nite Out is a decent addition to the collection - particularly in the new Blu Ray from Arrow Video, but more casual horror fans will understand why this was a second-tier film in the genre for its problematic foundations. Still, the great ideas and final moments of the film do warrant a recommendation for the slasher fans out there.