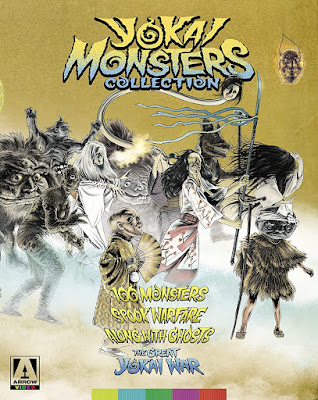 The mileage that one gets from the films included in Yokai Monsters depends on their ability to roll with the shifting genres and a sense of artifice within their stories. This review covers the first film in the series, 100 Monsters, but stay tuned for more reviews for the rest of the series. 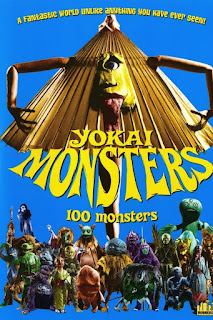 In the third act of this film, there is a parade sequence of monstrous spirits that is unleashed on the screen. This one moment, a seemingly haunting procession of strange creatures, exemplifies most of the strengths and obstacles of 100 Monsters as a film in total. It starts off eerily unnerving then becomes muddled in its purpose by continuing with its odd pacing at length and it finally caps off by coming back around to be offbeat and unnerving in an almost humorous way. Considering only a few minutes expire during this Jim Henson meets Japanese period set supernatural parade, it’s a roller coaster of mixed tones that both impresses and baffles.

The film as a whole is like this parade.

100 Monsters is a tale of historically set greedy politics where a local politician undercuts his way into wiping out some religious structures to make room for a new brothel while ignoring the warnings about the spirits that haunt the town. It’s a ripe concept that feeds into an anthology-like structure where the film detours to have characters tell a couple stories of crossing paths with the local mythological spirits. Yet, the film doesn’t quite buy into its own structure of plotting and the story motif is dropped to focus more on the main storyline. This creates a relatively stuttering narrative, where the stories highlight the horror elements that are meant to intertwine with the main story by the third act. It’s not the smoothest of writing, nor the cleanest in establishing the tidbits to be repeated later.

However, when 100 Monsters finds its groove, it’s incredibly effective.  For example, one of its first tales of horror features an impressively effective snake necked woman that utilizes some of the most impressive in camera visual tricks I’ve seen in quite some time. On the other end of the tonal spectrum, when the film takes a decidedly comedic tone, in reference to a subplot with an umbrella monster, it has an ability to be relatively unnerving and the strange puppet and costume effects add to the fantastical artifice of its feeling. When 100 Monsters wants to move, it’s an impressive feat of style.

The performances are solid enough, although the manner of the film’s writing and structure tends to focus more on the story in relation to its themes of greed, belief, and punishment than rock solid characters. A side plot featuring a ronin hero feels underdeveloped (perhaps purposefully so depending on how one wants to interpret the final act) and the mostly nightmarish logic of where the film ends undercuts some of the grounded elements of its main driving story. Whether or not director Yasuda intends for the film to be more satirical or not in deviating or leaning into the tropes while undercutting them makes for a smarter watch than I expected, but also one that also feels more muddled than intended.

Still, for the start of this trilogy of films, 100 Monsters plays with a lot of entertaining concepts and uses some fantastic visual effects (particularly for 1968) to blend tones, genres, and themes into a more traditional story. It’s an occasionally stuttered watch and one that never quite finds the balance to smoothly sell itself and the choices for focus might undercut a sharper film, but it’s still one hell of a foundation for this series.