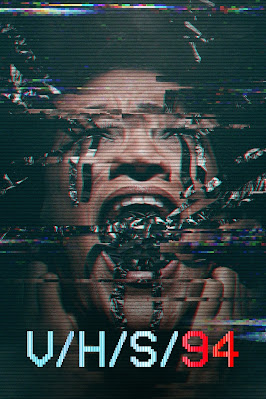 Another Halloween and another horror anthology film. One might read that sentence as a bad thing, but - hey - I’m all in on this trend. Particularly when it’s a revival of the impressive V/H/S series that were rocking the rails on two different horror cinema trends. The fourth film in the series, V/H/S/94, is a hell of a return to form after the forgettable misfire of the third film, V/H/S Viral. It’s a fun horror mixture of stories and approaches, it features some fun new reasons for people to be recording their stories, and there is a ton of new talent in executing those stories. For fans of either anthologies or found-footage horror, V/H/S/94 represents some of the best of both and kicks off the October spooky season nicely.

As with the other entries into this series, V/H/S/94 is built on a wraparound story about a mysterious location filled with VHS tapes featuring all kinds of weird horror stories. This time, a SWAT team is busting in to investigate some claims of a conspiracy. This isn’t a one-man show like the last few films that used this as a wraparound story. Unsurprisingly, the wraparound is the weakest of the stories here, mostly due to a finale that doesn’t quite live up to the initial mystery and tension, but it serves its purpose well. It gets its audience to start watching some tapes.

The rest of the stories represent some diverse (and highly enjoyable) short horror stories. As the title would indicate, all of them are set in 1994 and the film ably recreates the grain, wear, and tear of home VHS tapes of the period for all of its segments. It adds a lot of fun to mix, particularly when I thought to myself at one point ‘what the fuck is wrong with my tracking,’ only to remember that, for fuck’s sake, I was streaming it on Shudder. Too many hours with VHS in my youth, I guess.

The fun part of each segment is that the filmmakers are looking at the found footage in very creative ways and asking the question, ‘why would people have cameras and what can we do to those people?’ Whether it is the news segment gone awry in “Storm Drain”, the mad scientist video log for “The Subject”, or the requested videography for an overnight wake in “The Empty Wake,” all of the segments have a renewed sense of fun to them that balances out some of the horror elements.


Returning directors Simon Barrett and Timo Tjahjanto are wonderful to see again in the series and bring their usual strong sense of style and approach to horror. There’s fantastic slow-building and subtle atmosphere on “The Empty Wake” with Barrett and an insane Japanese splatter cyborg influence from Tjahjanto for “The Subject”. However, it’s the newcomers that might end up being the real reason to see the film. Most anthologies have a roller coaster of quality between stories, but V/H/S/94 is strangely effective through all of the different portions. Ryan Prows injects a ton of energy and dark humor into his homegrown terrorist story (also, if you haven’t, please see his feature film Lowlife - it’s fantastic) and Chloe Okuno handles the insanity of the reveal in “Storm Drain” with the utmost confidence. While I mentioned that the wraparound story might be my least favorite, director Jennifer Reeder does build it impressively with its imagery. Whatever film she directs after the impressive Knives And Skin is already on my must-see list.

With some strong visuals, fun special effects (there are a lot of segments that feature physical monsters which, to be fair, is a soft spot for me and I’m all for those reveals of the creatures), and pacing that whisks by, V/H/S/94 is a welcome comeback for one of the most dynamic series in horror. Not only is the film entertaining with its viscera and highly dynamic with its energetic outpouring, but it’s easily one of the best of the franchise and ranks up there with the brilliance of V/H/S/2. If you already have Shudder, don’t hesitate. If you don’t have Shudder, subscribe now for this one. It’s right at your fingertips for a fun horror evening and you don’t even have to worry about the tracking (even if it looks like you do.)