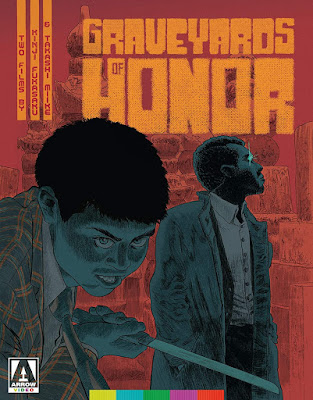 Two of the most iconic genre directors to ever come out of Japan are Kinji Fukasaku and Takashi Miike. If you’ve been reading this site for any length of time, you’ll notice that these are two are often discussed and that’s because of two reasons. Firstly, so much of their material is getting brand new English friendly releases from various distribution companies and we like to support these companies along with discussing cult icons. Secondly, they are incredible directors and deserve to have their lengthy careers discussed. For this review, both directors will be discussed because Arrow Video recently put out the Graveyards of Honor boxset that features Fukasaku’s 1970s original and Miike’s 00s remake. Both are classics in their own regard and hopefully, if you haven’t already purchased this set – then this double feature article will prompt a few people to pick it up. It’s a wildly nihilistic and extremely effective dual piece of cinematic genre bliss. 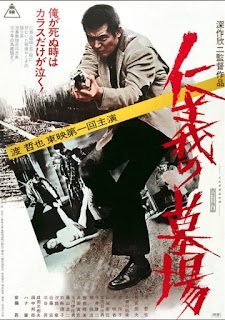 By 1975, Kinji Fukasaku had already established himself as the premier name in action and crime cinema. After a diverse start to his career, he shifted focus to realistic and grimy yakuza films in the early 70s. Not only had he just finished up his lengthy and Godfather-esque crime epic, Battles Without Honor and Humanity, he was already starting in his series New Battles Without Honor and Humanity. Those series are often lauded as the not only the films that changed action cinema for Japan at the time, but pinnacles of what Fukasaku could do with the style. While I am certainly in the minority, it’s of my opinion that the double feature of Cops Vs Thugs and Graveyard of Honor in 1975 that perfect the genre of the period.

It’s the latter that takes the formula and strips it back to its darkest and most gritty form. Anchored by an incredibly dense, layered, and perverse performance from Tetsuya Watari, who rose to fame as the charming and righteous yakuza man throughout film in the 1960s and early 70s, Fukasaku has no desire to showcase anything that would remotely resemble light and hope. Watari plays Rikio Ishikawa as a low-level gangster rising through the ranks of the local yakuza due to his blatant disregard for others and penchant for being as toxically violent as possible. Even though many of the other Fukasaku films of this era focus on the brutality of the yakuza, their cold steely demeanor as sinister forces in sharp suits, Graveyard of Honor takes that grittiness to the next level and ‘corrupting’ the visage of Watari by challenging him to one of the most intense roles of his career is only the start.


The plot of Graveyard of Honor is loose and combines documentary visual flourishes with cinematic pizzazz, which is very much of the director’s style of the time. Even when the film attempts at giving its protagonist tastes of hope, a romantic subplot, for example, the manner that the film treats it is quite disturbing. Rikio is simply chaos manifested and his abuse of those he loves, including his love interest Chieko – played with incredible fated sadness by Yumi Takigawa, is on full display. This is not often an easy film to watch. Yet, the manner that his life as a yakuza plays out is still fascinating and enticing. The plot, the performances, the style, and the pacing all make it a riveting watch and while the audience knows that nothing good will come out of his attempts to gather power and touch the sun, there is a sense that maybe, just maybe, redemption is possible. It’s this fine line that makes Graveyard of Honor such a strangely addictive watch while being so grossly heavy and dark. 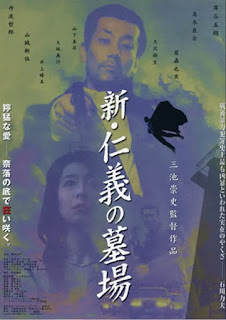 Although the remake of Fukasaku’s original follows many of the same beats and concepts of the original, having a director like a red hot Takashi Miike – fresh off of a few years of powerhouse films that put the auteur on the international scene, makes it just as intriguing. Particularly since 2002’s Graveyard of Honor is a film that remarkably leans away from Miike’s usual chaos incarnate style. Like its predecessor, the film tends to play things in a horrifyingly grounded manner, stripping away most of the documentarian style of the original and further layering in a vague and atmosphere heavy tonality.

The plot plays out in relatively the same manner, striking many of the same beats, as the newly named Rikuo Ishimatsu, played with crazy intensity by Goro Kishitani, finds himself accidentally thrust upwards in the hierarchy of the yakuza, despite his best efforts to thwart his own meteoric rise. The major difference is simply how Miike injects his usual themes into the material and, specifically, it’s the romantic subplot that takes the most interesting turn. Instead of an abusive relationship turned romantic, it’s simply an abusive relationship where the audience is aware of their attraction, but never actually sees the romance. It’s a stark reminder of the toxicity of Rikuo and the skewed world that he exists in.


At over 2 hours, the film can be a daunting watch with how heavy, violent, and dark it is throughout its plot, narrative, and character work, but Miike has such an innate sense of balance that it’s a riveting watch – even right after watching the original. The film is incredibly subtle for this period of his career, focusing on layered performances, dense atmosphere, and bursts of his usual insane violence. Yet, throughout its intense use of a chaotic protagonist, it’s hard to look away to see his eventual demise and that’s a true testament to the strength of this film.