All Fun And Games Until Someone Loses An Arm: The Shaolin Kids (1975) Review [Cinematic Vengeance Box Set] 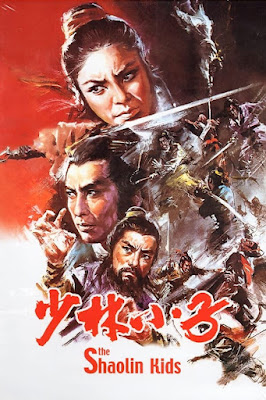 The career of Joseph Kuo, as certainly paralleled in the quality of various films included in the Cinematic Vengeance box set, does admirable things with what little he has on hand. It’s not always as successful as one might hope, but he often is able to create entertaining films, nonetheless. Just read through some of the other reviews on this site about his work. Or better yet just go watch his films. You won’t regret it.

This expectation in his ability to do so much with so little is why, perhaps, seeing a full costumed swordplay film from the skilled director made for slightly higher expectations. If he can make 7 Grandmasters, imagine what he could do with full sets and an epic script.

The Shaolin Kids, which has nothing to do with Shaolin or kids in the traditional sense, is an attempt to craft a big n’ bold epic. However, more does not always mean better, and The Shaolin Kids struggles to find a balance in its storytelling to embrace its ambitions. It’s loaded with some fantastic ideas and strong moments, but the whole is far less than the pieces. It’s entertaining enough for fans of the genre or the director, but hardly one of his best.

If anything, Joseph Kuo and company owe a lot to star Polly Shang-Kuan Ling-Feng. As the leading character in the film, Liu Hsin-Erh, she is easily the main reason to watch this film moment to moment. There are certainly a handful of secondary characters or strong casting choices to benefit Polly’s work, but she steals every moment as both a dynamic acting force, pissed off and ready to kill to take revenge for her father’s death, and as an action heroine who easily channels some Cheng Pei-Pei energy throughout.

Although the main story has to do with a cunningly evil Prime Minister looking to overthrow the government for his own power-hungry goals, when the film breaks down to its bare basics is when it works best. Too often the plot starts to dig into lost battle plans, political espionage, and a possible ambush. In these moments, it tends to lose steam with so many sequences of old men talking and snarling at one another. It’s pacing suffers as such and the film could easily lose more casual viewers.

However, in an attempt to give Polly and her cohorts a counter-balance, The Shaolin Kids does feature a handful of classic, gimmicky villains to jack up its entertainment factor. The Light and the Dark Killers, an assassin duo that repeatedly appears throughout, might end up being some of the most fun that this film is having in its vengeance fueled plot. They have magic gold resurrection pills and an invincible maneuver which has them scream out Heaven and Earth in a way only challenged by the Planeteers aiming to resurrect their god, Captain Planet. The final battle with our heroes and assassins is highly entertaining, outlandish, and benefits from its tonal shifts. Enough so that the film tends to peter off from that moment and coasts out to its lackluster finale.

The Shaolin Kids is an interesting movie in contrast to so many of Joseph Kuo’s other efforts, even if it often falls prey to being a Shaw Brothers swordplay knockoff throughout. It suffers from its ambitions at most points, bogged down by political intrigue and a slew of secondary characters that are as quickly ejected from the viewer’s memory as they are from the plot. To its benefit, Polly performs an Atlas like feat in carrying any emotional connection to the plot and the villainous henchmen deserve their own spin off. For those two things alone, kung fu and martial arts cinema fanatics should take a gander even if The Shaolin Kids is one of the weaker films in this set.