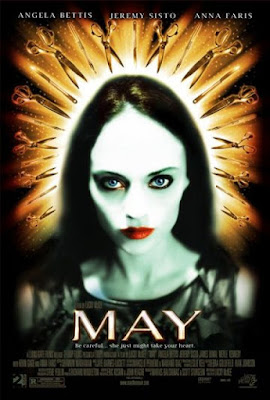 I ended up taking a gander at this little indie horror film due to some solid recommendations from trusted sources and I have to say that I was impressed. For its subject matter and low budget, this little pseudo coming of age tale about "coming to terms with who you are" packs quite a punch. At any given moment it could have moved into 'campy' territory but it rarely does and it makes it worth the watch.

May is not your average girl. She's been an outsider her entire life (mostly due to her lazy eye she was born with) and now that she's on her own, she has some issues to come to terms with. Her only friend is a homemade doll in a glass case and her only real friends is her co-worker at the animal hospital. When she sees a boy that intrigues her (but doesn't really acknowledge that she is there) she sets off to find a real friend and ends up finding that sometimes the sum of the parts isn't as good as the good parts of a person.


Naturally, this film comes across as a pretty simple story. It kind of runs as more of a drama with romantic tendencies - until it starts hitting on some of the more sketchy areas of May's personality and disturbing qualities. As I mentioned, May could have easily come off as a cheap ass attempt for a slasher flick, but with some clever writing and a very impressive visual and stylistic eye from writer/director Lucky McKee, it finds depth and symbolism that you may not see coming. It's far deeper than it even seems on the surface and it took a good time of thinking for me to grasp at it with its 'hodge podge' attack at working the doll and homemade clothing themes. It's impressive with its subtle symbolism under its straight forward story.

Angela Bettis carries the film on her thin shoulders quite well. Her quirky and darkly comedic take on May takes us for a fucking ride as we follow her on her roller coaster life. Only when she wants us to, do we ever see her as a 'villainous' character rather than the victim at any given moment and it's a ride I was more than willing to hitch shotgun on. A solid supporting cast (with a fairly impressive performance by Anna Faris - only known really for being in "Scary Movie" prior to this - as her friend/co-worker) helps out immensely with the world of May and elevates some of the weight of carrying the film off of Bettis. It's a combination and chemistry that took me out of the blue and adds even more to the tale.

"May" turned out to be a slice of indie horror heaven that may have crashed and burned at any given time. There is an edge and realism to the tale that runs as a warning to society and yet comes across as just darkly comedic and fantastical enough to not be too heavy. The ending was a spooky treat of 'what the fuck' that may make some viewers confused but I found fitting for the film. "May" surprises on many levels and that's why it should deserve its praise.