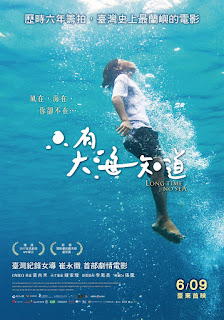 On the furthermost island of Taiwan, you'll find the land of Orchid Island, home to the people of the Tao tribe, that date back some 800 years ago. A rich culture that has seemed to wear itself away overtime with the locals, especially the youth. The focus is on a young boy who lives with his grandmother, his mother and father both off in the mainland of Taiwan for work, divorced, and leaving him solely with his grandmother. He yearns for his father to return home and that lack of a father figure gives him a sort of aimless feeling day to day as he skips school and tries to keep himself occupied.

A new teacher comes in from the city and begins to develop a relationship with the lonely young boy as the two's backstories begin to unfold to one another. In addition to them, a local radio DJ enters the teacher's life and begins to make him rethink his failing relationship his girlfriend who stayed back in the city. At the school, the principal comes forth with a plan to host a dance ceremony that showcases traditional Tao dancing. Eager to find purpose, the newest teacher undergoes the task. 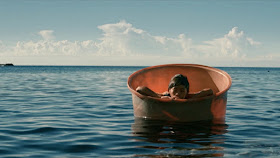 Right from the from the first scene, the preset fear of the film looking like a travelogue ad for Orchid Island was put to ease when the visually stunning cinematography revealed itself. I went into this one blind aside from a brief plot synopsis. These type of movies usually withhold the glossy fake sheen of such products. Thank goodness great thought and care went into every technical aspect here. It is a beautiful movie and really honors the long lived legacy of a proud people and their home.

The acting is spot on as well. The award worthy newcomer Zhong Jia-jin gives a central perfomance so sincere that he demands future attention and is bound to make a great impression on the industry. Shang He-huang gives a fantastic turn in as the teacher who forms a familial bond between himself and the boy, creating a genuine chemistry between the two performers. Unfortunately, although they do a fine job with what they are given, none of the female characters have enough time to truly shine or be fully developed for that matter, which brings out the beginning of the film's drawbacks. 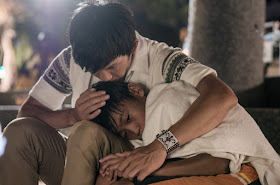 While the film has a ton of technical finesse and the performances are all believable, the writing falters thus ultimately hindering a potentially great piece of cinema. The narrative is quite rushed, with larger character beats happening so early on, you aren't able to begin to be immersed into the world or feel engaged with the characters until much later on in the runtime. The cliches and coincidences come in fast and hard too. What are the odds that the love interest would repeatedly find herself in the presence of the teacher, considering her odd job occupations seem to shift conveniently in accordance with his geographical location. Slim. I'd say extremely slim. Oh and she happens to be a full-time radio DJ  and the person to come in and help teach traditional dance to the students. It isn't spoiling anything as the smell of it coming is given off from miles away.

Overall, I truly find myself glad to have had the opportunity to see this film and do not regret it. Hopefully next time around, director Heather Tsui will have a more fleshed out script. She really got a lot out of a weaker screenplay. Fortunately so much heart went into this production that it shows on-screen nearly every second. A great celebration of a ultural heritage and beautiful nod to the Tao people.

Written by Josh Parmer
Josh Parmer at 2:32 AM
Share